Fall Of Empires: Rome vs USA (Hidden Secrets Of Money Ep 9 and 10)

In episode 9 of Hidden Secrets of Money, Mike Maloney draws eerie parallels to the misguided leaders and monetary policies that doomed civilizations from Ancient Rome to modern-day America. Can President Trump save America? Will the Federal Reserve Board be able to pull off yet another round of extremist interference and postpone a crisis? Find out how Mike he believes it will play out. Want more? Don't miss episode 9 & 10 exclusive bonus features Click here to watch eight bonus feature videos, kicking off with a 39-minute Director's Cut feature from Mike himself! If you enjoyed watching this video, be sure to pick up a free copy of Mike's bestselling book, Guide to Investing in Gold & Silver: https://goldsilver.com/buy-online/inv...

Posted by Buddy Huggins at 7:23 PM No comments:

SerialBrain2: The pipe bombs, the synagogue shooting and the Air Force One umbrella.

Post # 111 - The pipe bombs, the synagogue shooting and the Air Force One umbrella.

Violence in politics is for losers. As simple as that.
​
True politics is about sharing ideas and convincing people to accept them or to improve them through logical discourse and honest interactions. Those who communicate through violence have proved their inability to function in the realm of ideas and should therefore be dismissed and neutralized by the institutions we have put in charge of our security.
​
A few months ago, in my article entitled “Q teaches us the game of politics” that you may find in AW9’s archive, I explained how what I called the Count for Peace Principle was a turning point in the history of mankind and how it contributed to the emergence of a political conversation excluding all forms of violence. It seems this article was premonitory…
​
Do you remember my childhood friend Frank? The one who used to borrow my bike and always return it damaged? I told you in this post I had to use Trump’s NK trick against the Deep State to preserve my bike from dying prematurely. Well, Frank had another interesting feature: every time we played chess and he saw he was about to lose, he would start scratching himself frenetically and cough in crescendo. His imaginary allergies with multiple changing names would strike right at that moment and we would have to stop the game…
Look, it seems Dems are about to be checkmated Img1
​
Let’s analyze this interesting progression. Here is a first layer timeline: Img2
​
They started claiming there would be a blue wave, then, Holder said “when they go low, we kick them”, then, the Witch said “no civility until we win”, then, the caravan. When Trump responded with a deadly “Democrats produce mobs, Republicans produce jobs”, they realized this was another “because you’d be in jail” moment. They knew right then and there they lost the Midterms. Then, to make things worse, the early vote numbers came in to confirm there would be no blue wave and that according to their own media, Republicans were outpacing Democrats in key states. It was time to start scratching and coughing. Hence the pipe bombs.
Of course, it only took a few hours to find the needle in the haystack, arrest the sender of these “explosive devices” and find out - what a surprise - he was a MAGA supporter. It seems he was never introduced to the concept of finger prints or DNA but had enough expertise to build explosive devices…
​
Unfortunately for them, the majority of the American People did not buy it. The Deep State and their Fake News network still fail to realize the Great Awakening is real: in addition to Trump’s election, an interesting marker is how they tried to take down Jim Jordan and Kavanaugh and failed. It’s over. The Deep State and their Fake News cannot present realities anymore and get the American people to believe them without thinking critically, doing their own research and reaching their own conclusions. The Fake News is dead. They just don’t realize it yet. So? Next step was the Pittsburg synagogue mass shooting. After they saw scratching and coughing did not stop the momentum, they had to show their true colors and resort to real violence, with real casualties.
​
Q1470
...
These people HATE America.
Q
​
Do you see the escalation?
From Maxine Waters’ “you create a crowd”, to “we kick them”, to “no civility until we win”, to the pipe bombs, to the synagogue mass shooting, who do you think is responsible and what do you think will be next? If someone promises he will burn your house and it’s on fire the next day, who would be the first suspect?
Well, Dems claim you would…
​
But then, there is the Trump effect.
Everything they do backfires on them.
They tried to claim Trump had some kind of responsibility.
Let’s watch Ron Dermer, the Israeli Ambassador to the US: video.

As you can see, the Ambassador clearly exonerates Trump and the Republicans from any kind of responsibility here. To this despicable act of evil committed in a place of worship, Trump responded in the most elegant way and invited a Rabbi and a Pastor to pray for the victims. This is the right time to be grateful we now have a President who knows religious diversity is an asset and not a cause for division. He showed it the day he was inaugurated and the following image confirms it Img3
​
This is what can be said at first glance about this Red October month. Are you now ready to go deeper and explore what is really going on behind the scenes?
Here is a second timeline. Img4
​
As you can see, we entered October after Trump put pressure on OPEC for weeks to lower oil prices. This dispute culminated on Oct 2nd when Trump declared the Saudi King would not last 2 weeks if US protection were removed. This was a perfect time for Kashoggi to disappear. He did the same day. To explain Kashoggi’s disappearance and then murder, we were told a team of 18 people traveling from Saudi Arabia were filmed coming out of a van and entering the Consulate for this operation.

Was Kashoggi some kind of Hulk to require the Saudi authorities to displace 18 trained agents to get him?

Interesting…
The stage was now set to isolate Trump, ask the question: “should Trump still sell 110 Billion dollar worth of weapon to Saudi Arabia?” and get Russia, China and others to start eying this juicy contract. It didn’t work.
First, Trump disconnected the arms deal from Kashoggi. Then, in a beautiful chess move, he announced he was withdrawing from the Nuclear Pact with Russia. Putin, an excellent chess player, read the move perfectly and warned it would trigger a new arms race. That was the purpose: with a stronger economy, the US would be in a position to sustain a race when Russia and China could not. While this race is ongoing, no other country would have the financial and military comfort to supply Saudi Arabia.
Check.
​
Just like they tried with Kashoggi to capitalize on the oil dispute, the Deep State tried the same with this possible arms race by offering to Putin an alliance to neutralize Trump. This is why on Oct 23rd, the Mockingbird NY Times published a fiction describing Trump’s assassination by a Russian with the help of Secret Service. Putin knows better… He’s playing 3D chess with Trump while the Deep State is still looking for its checker pieces.
By the way, do you like olives? video.
​
This is the perfect transition to talk about the 13 Cesar Sayoc pipe bombs.  Img5
Did you notice Brennan’s pipe bomb was discovered on Oct 24th with a missing N and was sent to CNN instead of MSNBC? Are you ready to go for a quest with me and look for the significance of this missing N?
​
Let’s listen to Trump at the rally in Houston, 2 days prior from 42:50 to 43:55: video.
Did you catch it?
Trump says “he voted for ObamNa Amnesty”. Coincidence?
Mispronunciation or is this our missing N?
Did you catch the double meaning? As early as January 27 2018, Q told us:
​
Q603
TODAY, former President Barack HUSSEIN Obama formally retained counsel
(9/WW).
GOD BLESS YOU ALL.
Q
​
If the Contortionist retained legal counsel, it means he was in legal trouble.
Those who are familiar with my writings already know why he is in trouble.
They already know Sessions has silently done the job behind the scenes with his team to bring all the people involved in the private server, FISA and other legal beauties to justice.

Look at Q’s last drop:
Q2381
How do you navigate around installed corrupt [FBI][DOJ]?
USE A STEALTH BOMBER
​
Now question: if the Maestro is signaling there is a possibility for Obama to get an Amnesty (probably in exchange for cooperation), what do you think would be the Deep State’s next move? Bingo: threaten all their puppets and tell them to shut up or else. Hence the pipe bombs. The missing N in Brennan’s package was the link to Trump’s reference to Amnesty and it was sent to CNN instead of MSNBC to emphasize focus on the letterN.
​
Now why did the Deep State pick Cesar Sayoc?
Answer: kill two birds with the same stone. Notice the initials CS.
One step further in the alphabet and you get DT: Donald Trump.
The pipe bombs were also a threat to Trump: "if you move one step further, these bombs will detonate.
We know we already lost the Tarmac Grandma:
​
Q2203
PANIC IN DC LYNCH talking.
Q
​
But that’s all you’ll get.
You’d better step back, leave our puppets alone and forget about your amnesty idea".
Then, 3 days later, they attacked the Pittsburg synagogue. Do you see it? Why a synagogue?
You have to remember: these people are evil. They will not hesitate to coldly kill to just get one message across. Synagogue… Judaism… Jewish… What is the Jewish gematria for CESAR SAYOC? Yes 723.
Same Jewish gematria as BARRON TRUMP.
Coincidence?
The pipe bomb distribution was the first part of the Deep State message to Trump, the remaining parts came with the synagogue mass shooting.
The Deep State is threatening our duly elected President and his family. Again.
​
Q2353
WELCOME TO THE DEMOCRAT PARTY.
The Party of threats, violence, intimidation, name-calling, racism, fascism, division, …..
#WALKAWAY
#VOTEREPUBLICAN
Q
​
====end Part one==== 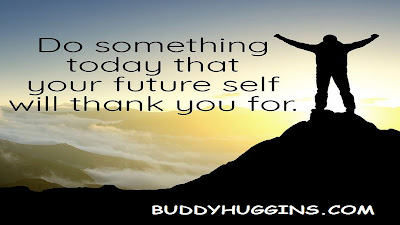 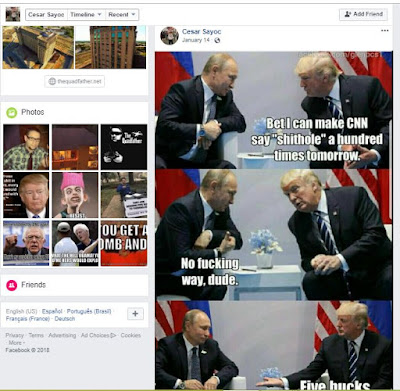 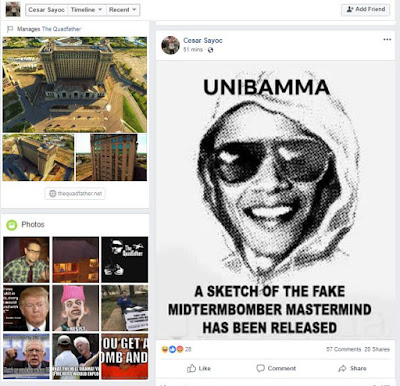 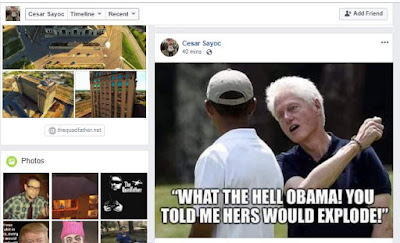 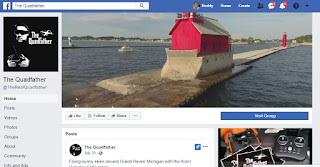 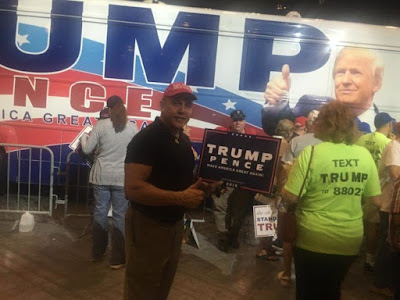 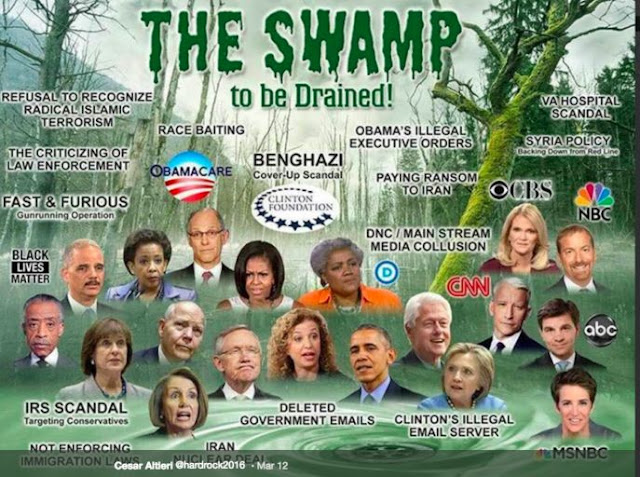 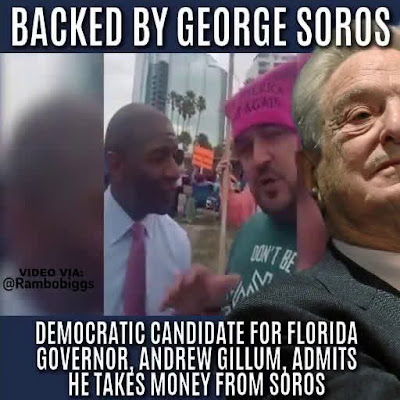 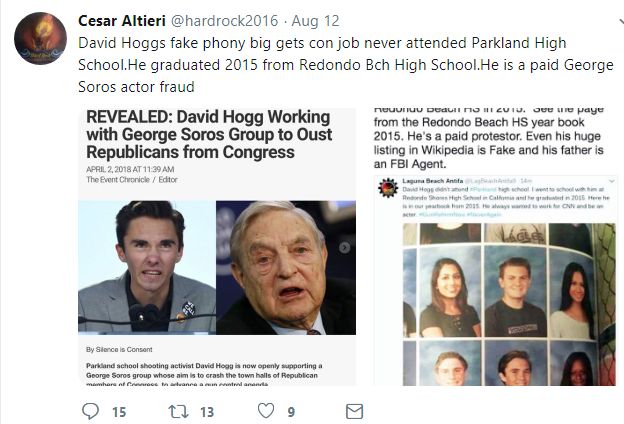 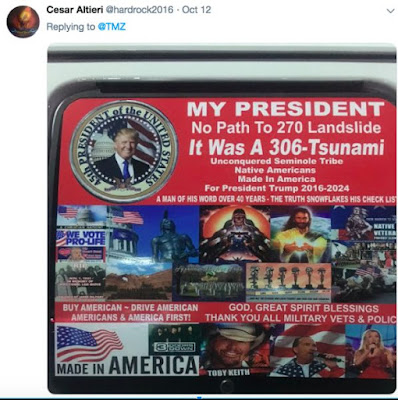 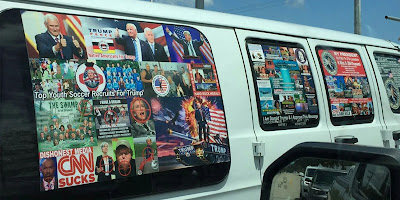 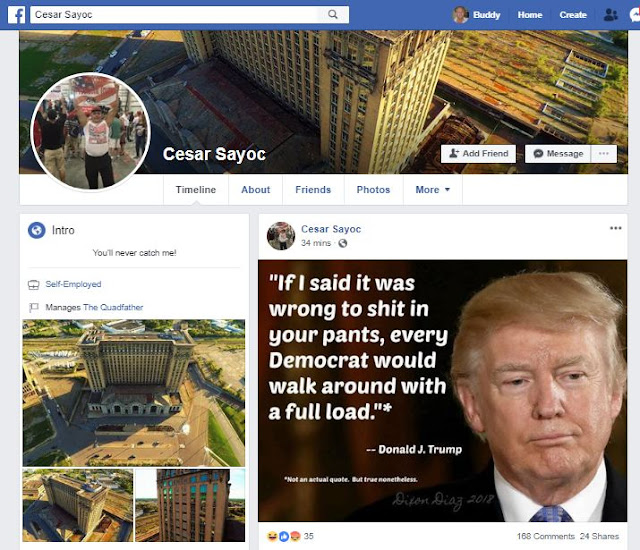 Posted by Buddy Huggins at 5:08 PM No comments: