Carlita Shaw Be the Change Hypnotherapy 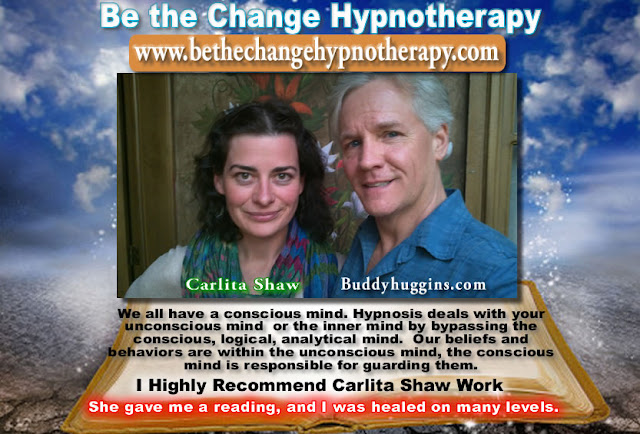 Exploring Consciousness and Hypnotherapy as a Healing Tool for Self Empowerment. The Trance Formational Center
visit www.bethechangehypnotherapy.com.

Article about Carlita and the Benefits of Hypnotherapy

January 22, 2013 //
0
Hypnotherapist Carlita Shaw discovered her passion early
Posted By Admin | originally Published: August 12, 2012 01:58
By Susan Schenck (Interview By Susan Schenck, writer for “Cuenca HighLife” and “The Miami Herald”,  Expert Author on Raw Foods).
Q: What do you offer the community here in your practice?
A: I offer hypnotherapy, qigong, and meditation and  group workshops now  in the UK  after having recently returned from Ecuador
I have had a longstanding interest in alternative health and medicinal products, due to re-occurring tumors and health issues since I was very young, which is why I practice qigong and hypnotherapy. 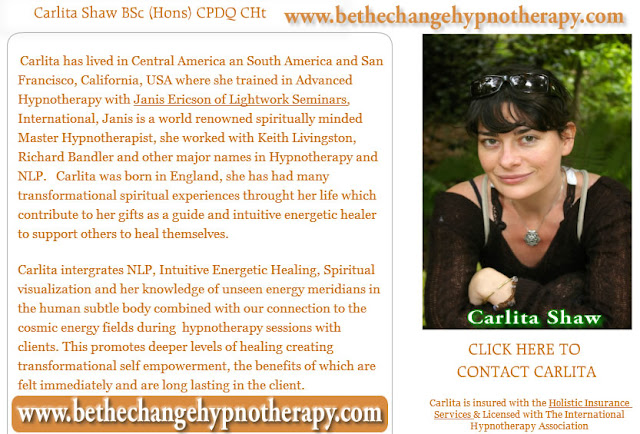 
Carlita Shaw has the tables turned and is interviewed by Michel Blanchard and Ashley Rogers of Radio Ecuador. Topics discussed are Conservation in the Ecuadorian Amazon, How Carlita met Pascual Kunchicuy and was inspired to set up the foundation Evolve to Ecology to support the Shiwiar people, the most recently discovered indigenous people of the rainforest in Ecuador, Pascual's work history and Shiwiar tribal roots and how they were discovered. Other subjects discussed are how  important Sustainability is for humankind and sustainability and food production in Ecuador, Nuclear power vsFree Energy and other supressed technologies, Trevor James Constable, Patrick Kelly, Dr Brian O'Leary, Jason Verbelli & Sir John Searl`s work, Exopolitics, Exopolitics University and Alfred Lambremont Webre III,  Neil Kramer Consciousness and the benefits of hypnotherapy.
Thanks to Michel Blanchard & Ashley Rogers Ecuador at your Service
Article about Carlita here
Transcript and further links available on Sailing Beyond Knowledge Blog
Other SBK links
Sailing Beyond Knowledge on Twitter
Sailing Beyond Knowledge on Facebook
Ecology
Visit & Join Carlita's  Ecology Projects at Evolve to Ecology

Posted by Buddy Huggins at 3:32 PM

Email ThisBlogThis!Share to TwitterShare to FacebookShare to Pinterest
Labels: Carlita Shaw Be the Change Hypnotherapy